The Science behind Driverless Cars of the Future

Technology can be interesting when it peels back the screen and gives us a chance to take a look at what the future may hold for us. Driverless cars sound like something out of a futuristic novel, but they are not out of the question. Automobiles already require computerized chips to do quite a bit and it stands to reason that computer technology could make a vehicle even more autonomous. These vehicles moved a step closer to the display case in 2014 when the British government agreed to allow driverless vehicles to be tested on roads in the United Kingdom. 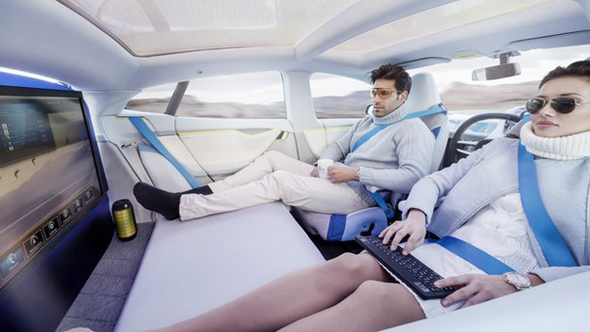 One of the biggest benefits of driverless cars is expected to be in safety. Experts claim that most auto accidents are the result of human error and lapse of judgment. Computers don’t lose concentration in rush hour traffic, and sensory equipment that can detect proximity to other vehicles will be fully operational. The driverless car would have a pre-safe system that will react quickly by preparing a response. It can be as easy as getting the brakes ready so that simply touching the brake pedal result in a full stop. It is quite possible that cars driving at a certain speed or lower will be stopped automatically if a crash appears imminent. These are just some of the things that computers can do in the interest of safety. A critical difference is the response time of the driverless car will be much quicker than that of a human driver. Computers can also be programmed to take less risks than a human driver. This programming by itself can cut down on the number of accidents experienced on the road.

Some of the activities required for operating a car are already driverless capable. One of these is parking. The Audi RS7 Sportback SUV is able to park itself. As soon as it is positioned it can be commanded to vacate the parking space as well, using a smart phone app. Carnegie Mellon University has developed a car known as the Cadillac SRX. This vehicle has sensors, cameras, radar technology actually built into the body of the car. The systems built within the automobile allows for ordinary functions such as steering and braking. The vehicle is also able to avoid pedestrians do quick detection and can control speed of the automobile as well.

There are naturally, critics and skeptics. Objections such as cameras being blocked by sunlight or in adequate maps are some of the concerns that are being raised about driverless cars. There are some concerns about how the driverless car can operate in stop and go urban traffic. Acceleration has to be able to be at par with that of human driven autos. The technology is getting more affordable, but it is still fairly expensive. One social question is what it does to labor. The driverless vehicle can put chauffeurs and taxi drivers out of business rather quickly.

Questions on performance of driverless cars

The questions regarding performance are going to be the most pressing The British tests of driverless cars in 2015 will be able to give even more definitive information about the automobile’s feasibility. Tests are expected to include tele-operated driving and autonomy levels that are gradually stepped up. The work will not all be on straight lanes and flat surfaces. Bristol is anticipated to be one of the testing grounds and it is noted for having a less than driver friendly terrain. The intent is to explore as much as possible the range and limits of the driverless car.

The idea of driverless cars is no longer something from the pages of science fiction. The safety potential that these vehicles can offer are benefits that cannot be denied. The ability of driverless car to navigate turns and handle stop and go traffic has to be investigated further. Additionally, acceleration may be too slow for this type of vehicle to be operated in certain areas. This is where the additional testing that will be done in the United Kingdom becomes extremely important to the future. Driverless cars cannot be ruled out despite whatever critics may say. If nothing else comes out of the research and testing the results may provide safety, and convenience features currently not available. Research also points to an even greater use of computers and sensory equipment in the average automobile.